It’s hard to overstate the impact gospel music has had on Black Christian culture. With soul-catching lyrics and musical stylings reminiscent of R&B, it’s no wonder the genre has maintained steady success.

Dating back to slave hymns as a unified way to uplift and encourage perseverance in the midst of troubled times, gospel music has had a significant impact on other genres. Hip-hop, soul, country, and more regularly borrow elements from the DNA of gospel music.

Black gospel artists can claim the largest chunk of credit from that impact because many generations of musicians grew up in the church. In fact, it’s not uncommon to hear artists note that their musical careers began with singing with the choir on Sunday mornings.

Over time, gospel and popular culture came together with the likes of Missy Elliott and Kanye West creating and producing top crossover hits. In 2019 West was Billboard’s #1 Gospel Artist. He came in just above Kirk Franklin, who introduced a sound and presence that consistently garners criticism among lovers of a more traditional gospel sound and ethos. If anything, Franklin paved the way for younger artists. On the Billboard charts, you will find artists who have established an international musical ministry in their success.

In the 1990s and early 2000s, a look at the top gospel charts reveals one or two pop or R&B artists who “got saved” and “went gospel” as somewhat of a sacrifice for their religious beliefs. These days you’ll see artists stretch their legs in both genres with a more welcoming atmosphere for those who also make secular music.

Jekalyn Carr is a force in gospel music, as evidenced by her success on the charts. Although she began her career as a highly coveted speaker, she soon transitioned into music as an independent artist. At age 16, she earned her first Stellar Award as a musical artist. Since then she has become a Grammy-nominated artist with a slew of accolades under her belt, including four Stellar Gospel Music Awards, one GMA Dove Award, and two Billboard Award nominations.

Kirk Franklin burst onto the scene as the choir director with his act Kirk Franklin and the Family in 1993. As his career progressed, he became more of the gospel equivalent of a hype man who produces chart-toppers.To this day, Franklin is known as a hitmaker in the industry. His list of honors includes just about everything under the sun, from Soul Train Awards to BET Awards to Grammys to Stellar Awards, and more.

We’ve entered gospel royalty territory with Fred Hammond, who has more than 30 years of excellence in the industry and is responsible for hits like “No Weapon” (1996), “Awesome God” (2009), and many more. Not only was he included on the Essence 2017 list of 50 greatest male singers for his angelic voice, but he has also sold a staggering 8 million records worldwide. He has received six Dove Awards, four Stellar Awards, and several Grammy Awards. Along with Hammond’s solo work, he is also a renowned producer, with more than 100 projects under his belt. In 2019 he worked with Kanye West, who ended the year as the Top Gospel Artist.

You might recognize Koryn Hawthorne from television because she made her debut on NBC’s “The Voice.” Under Pharrell’s tutelage, she competed at the young age of 17. She went on to place fourth overall in the competition and was signed to RCA Inspiration (Sony’s gospel division). Hawthorne’s debut album earned her two Grammy nods, and her first single has been certified gold. In July 2020 Hawthorne released an album that topped Billboard’s Gospel Digital Song Sales chart.

Israel Houghton, musically known as Israel & New Breed, has a massive discography that speaks volumes. Houghton’s first album was released in 1997, and he has steadily released music ever since. Israel & New Breed earned six Grammy Awards, along with several others from the GMA Dove Awards and Stellar Awards. Houghton is most well-known for his contemporary Christian sound. His 2004 album, “Live From Another Level,” has become the praise and worship soundtrack for millions.

Tasha Cobbs Leonard started her career in 2006 touring with Pastor William Murphy. After Leonard released her first album, she signed to what is now Motown Gospel, and her success skyrocketed. The EP she released under the label hit #2 on the Top Gospel Albums chart in 2013, and the single “Break Every Chain” went on to be certified platinum.

Tamela Mann’s career has been notable from the start as she arrived on the scene as part of the choir in Kirk Franklin and the Family. Shortly after, she was discovered by Tyler Perry who put her to work in almost every Madea film and television spin-off in existence, portraying the role of Mr. Brown’s daughter (played by her husband, David Mann). In their time working with Perry, Tamela and David Mann have become a recognizable duo. Along with creating gospel music, they also hosted a cooking show and a reality TV show on BET in 2015.

Jonathan McReynolds is a gospel industry leader, making waves as an artist ushering in a new era in the genre. His first album, “Life Music,” charted at #3 on the Billboard’s Gospel charts. As that album took off, so did his career, especially when it earned him an appearance on BET’s “Celebration of Gospel.” His second album was an even bigger success, featuring such artists as India.Arie, Israel Houghton and more. Each of his subsequent efforts earned success while he worked on personal projects such as establishing a nonprofit, Elihu Nation. McReynolds was also admitted to MENSA, a high IQ society. You can see McReynolds as a host of the most recent season of BET’s “Sunday Best.”

Bishop Marvin Sapp, like many other gospel artists, started his career singing with a group, in this case, it was called Commissioned. In 1996 Sapp left the group and rebranded himself as a solo contemporary gospel artist. After recording six albums, his seventh, “Thirsty,” shot him into a whole new level of success in the gospel world. The album reached the #1 spot of Billboard’s Top Gospel Albums chart and was certified gold. Sapp was nominated for and won seven Stellar Awards in 2009. His career has stamina, though, because he would raise the stakes again with his 2010 album “Here I Am.” That release solidified Sapp as Billboard’s most successful gospel artist in its entire history at the time. He is currently a senior pastor at Chosen Vessel in Fort Worth, Texas.

Kanye West may not have been the first name we thought about when we heard the word “gospel,” but he’s changing the industry with his 2019 effort “Jesus Is King.” With the album’s release, West rode all the way up the charts, ending the year as Billboard’s top Gospel Artist. West capped his success by releasing a second album on Christmas Day that same year with songs from his Sunday Service program. Earlier in his career, he had introduced a God-element to his music with the hit “Jesus Walks.” That single went on to win a Grammy for Best Rap Song, a BET Award for Video of the Year, and an MTV Music Video Award for Best Male Video. 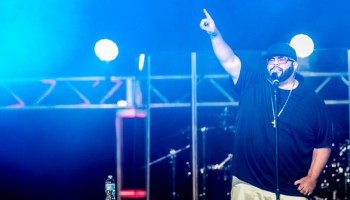